Statistics released today by the Canadian Real Estate Association (CREA) show that the slowdown that began in March in response to higher interest rates has broadened. Home sales recorded over Canadian MLS® Systems fell by 5.6% between May and June 2022, taking second-quarter sales down sharply (see chart below). The actual (not seasonally adjusted) number of transactions in June 2022 came in 23.9% below the record for that month set last year and is below its 10-year monthly moving average.

“Sales activity continues to slow in the face of rising interest rates and uncertainty,” said Jill Oudil, Chair of CREA. “The cost of borrowing has overtaken supply as the dominant factor affecting housing markets at the moment, but the supply issue has not gone away.”

The Bank of Canada’s shocking 100 basis point hike in the benchmark policy rate will accelerate the slowdown in the coming months.

“One important feature of the market right now that isn’t getting enough attention is the difference in mortgage qualification criteria between fixed and variable, because while variable rates adjust in real-time, fixed rates have already priced in most of what the Bank of Canada is expected to do over the balance of 2022,” said Shaun Cathcart, CREA’s Senior Economist. “As such, it’s no surprise to see people piling into variable rate mortgages at record levels, but probably not for the reasons they may have chosen them in the past. It’s because the 200 basis points plus the contract rate element of the stress test has, just since April, become much more difficult to pass if you want a fixed-rate mortgage. A strict stress test made sense when rates were at a record-low, but policymakers may want to assess if it continues to meet its policy objectives now that fixed mortgage rates are back at more normal levels.” 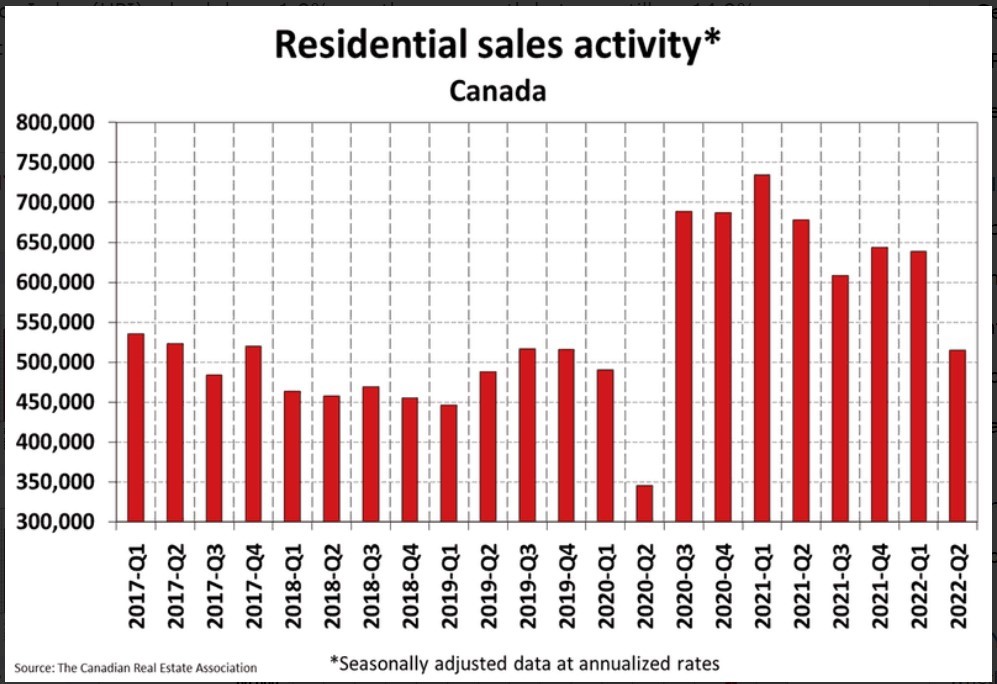 The number of newly listed homes climbed 4.1% month-over-month in June. The monthly increase was most influenced by a jump in new supply in Montreal, while new listings in the GTA and Greater Vancouver posted slight declines. 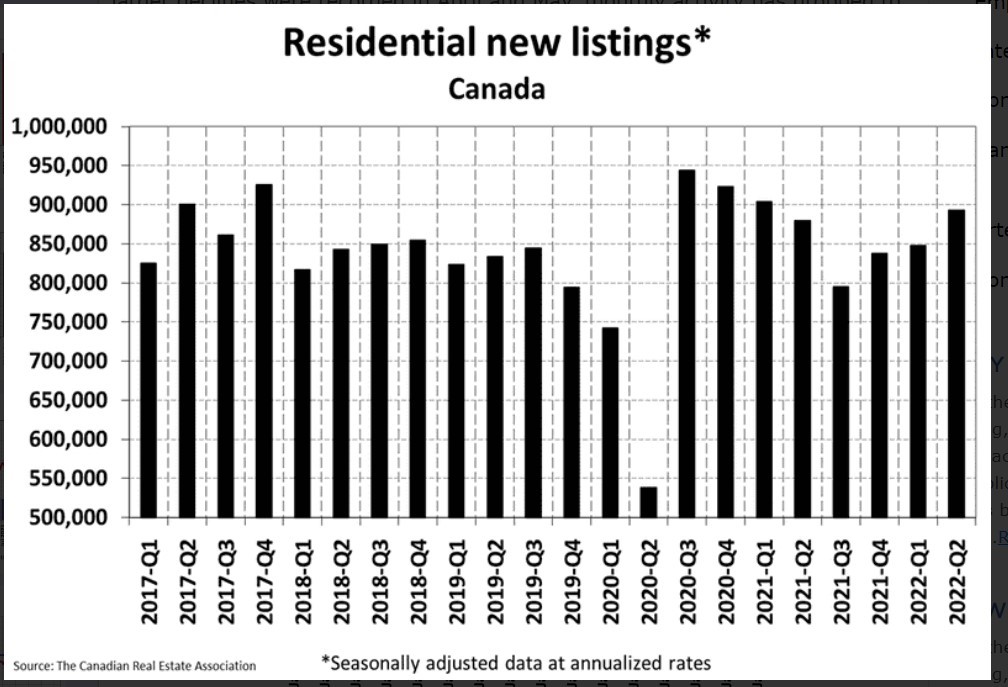 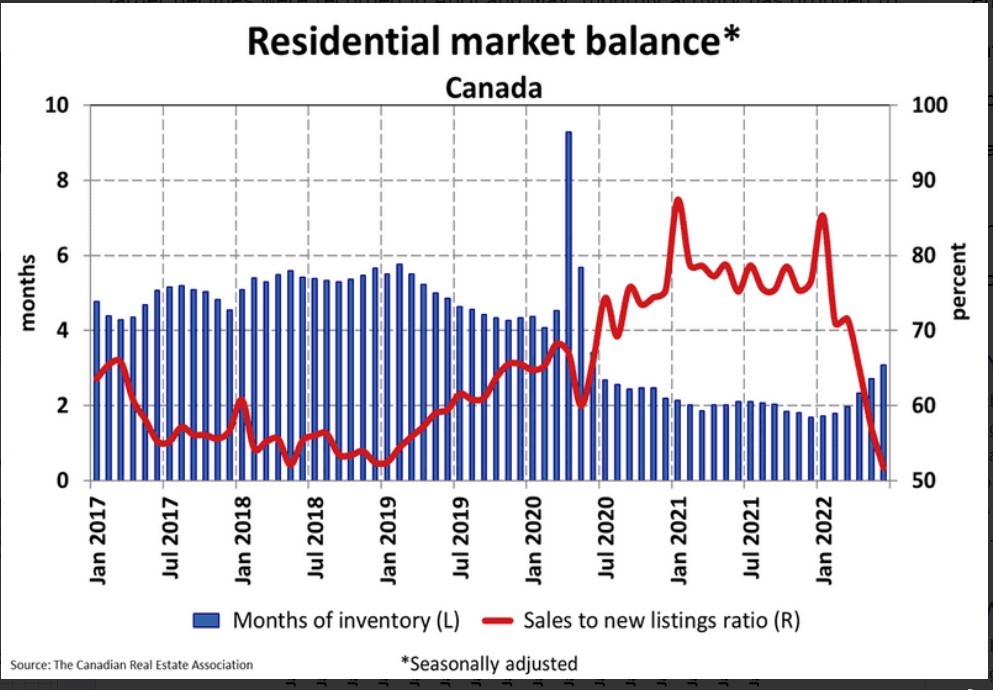 The Aggregate Composite MLS® Home Price Index (HPI) edged down 1.9% on a month-over-month basis in June 2022.

Regionally, most of the monthly declines were seen in markets in Ontario. Home prices have also eased in parts of British Columbia, although the B.C. provincial totals have been propped up by mostly static prices in Greater Vancouver.

Prices continue to be more or less flat across the Prairies while only just now showing small signs of declines in Quebec.

On the East Coast, prices are mostly continuing to rise but appear to have stalled in Halifax-Dartmouth.

The non-seasonally adjusted Aggregate Composite MLS® HPI was still up by 14.9% on a year-over-year basis in June, although this was just half the near 30% record year-over-year increases logged in January and February (see chart and tables below for details by region) 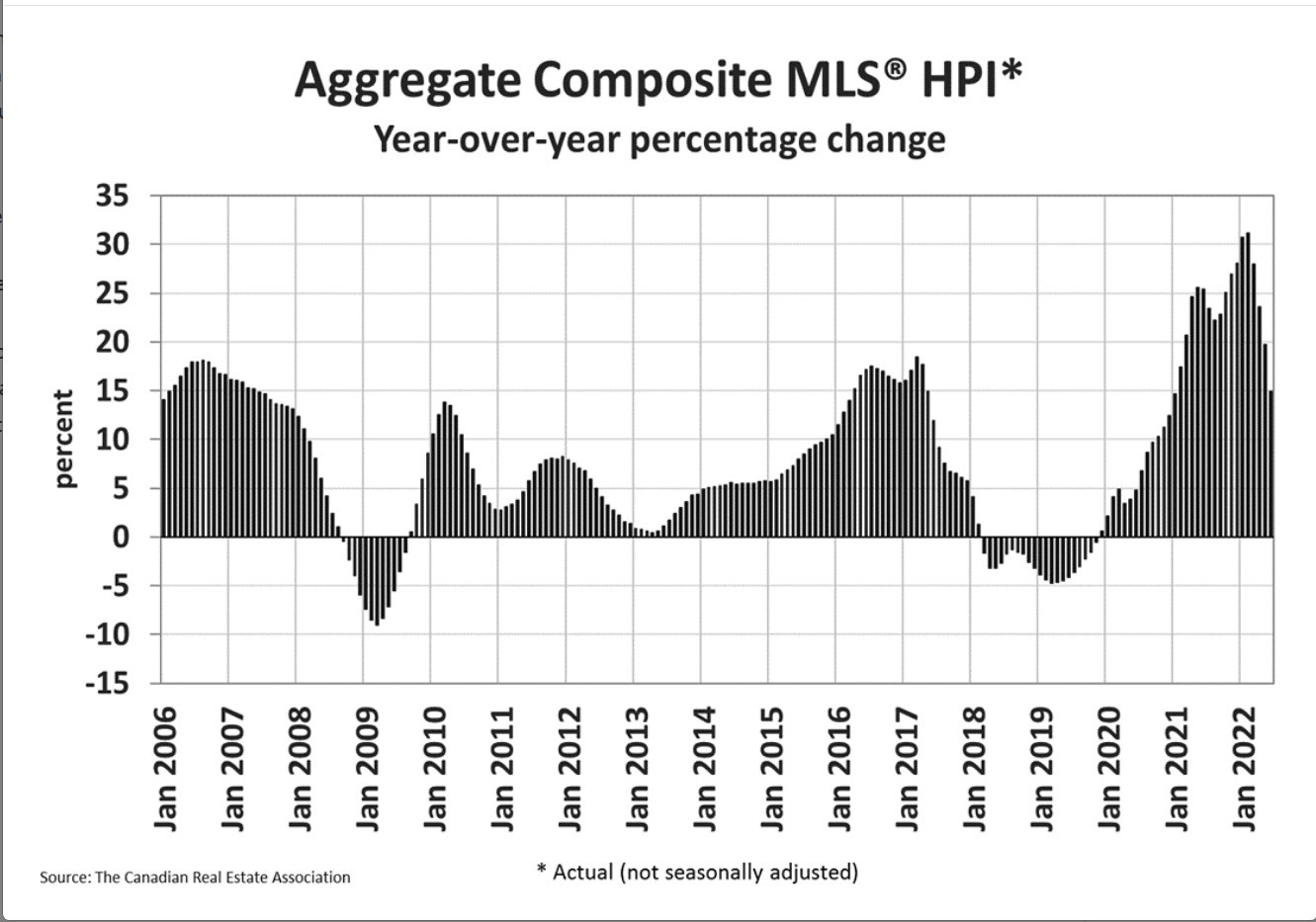 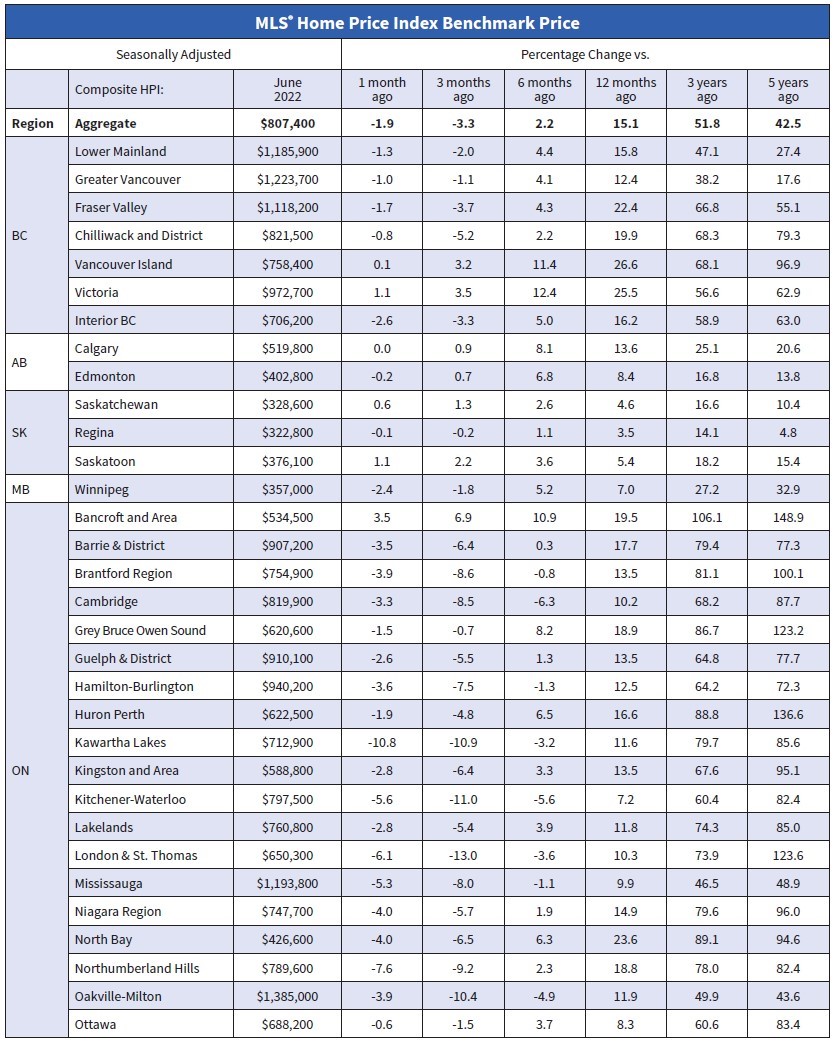 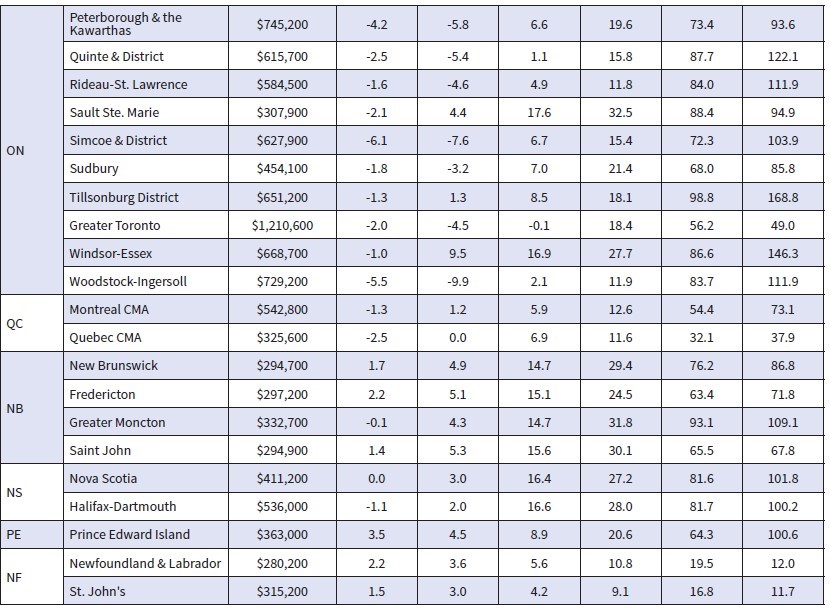 In many respects, today’s housing data trends are already outdated. It changed with the blockbuster rate hike a couple of days ago. Excess housing demand is essentially over, and we are heading into a more fragile period for resale volumes and prices. The national sales-to-new listings ratio fell to 51.7% in June, which is considered balanced, but it’s the lowest ratio since 2015 and is headed in a softer direction. Buyers’ markets are already evident, especially in some of the suburbs/exurbs in Ontario and parts of BC. These are the regions that posted extreme price gains last year. Others, such as cities in oil-rich Alberta and Atlantic Canada, are still holding in well.

With the Bank of Canada’s most recent tightening, qualifying rates are ratcheting up for both variable and fixed mortgage rates. Before the one percentage point rate hike, variable rate loans were qualifying at 5.25%, but now that has shifted to around 6%. Fixed-rate borrowers are qualifying at about 7%. The Canadian prime rate has surged this year, increasing variable mortgage rates by roughly 300 basis points. Robert Kavcic at BMO has calculated that “going from 1.5% to 4.5% on the same loan value would crank up the monthly variable-rate mortgage payment by almost 40%, making the current episode an even more abrupt shift than the late-1980s  after adjusting for income levels.”

Kavcic continues, “the vast majority of borrowers currently on variable-rate mortgages have fixed payment features, but even there, things are now getting dicey. For example, moving a variable rate up from 1.5% to 4% with a fixed payment would effectively increase the amortization from 25 years to 45 years. Another 50 basis-point rate hike in September would take that above 60 years—that is, many will reach the point where payments are no longer taking down the principal. Each mortgage will have its unique terms when payments start to move higher, but for those that caught the low in variable rates, we’ll probably be there soon. Of course, HELOC payments used to finance many multiple-property purchases are ratcheting up in real-time.”

There is also the risk that the federal financial institutions’ regulator, OSFI, will intervene to protect the big Chartered Banks from taking on too much risk rather than making it easier for borrowers to qualify or to carry variable-rate loans in this environment.

Moreover, mortgage renewals pose a problem as well. Fixed mortgage rates five years ago were roughly 3%. Resetting the mortgage at 4.5% will lead to a monthly payment increase of approximately 15%, all else equal.

With the latest move by the Bank of Canada, more potential buyers will believe that home prices are likely to fall, taking the FOMO factor out of the housing market. This removes the critical ingredient that drove prices up rapidly since the pandemic began.

If you have any questions, contact Brent today or book a call-back time here.